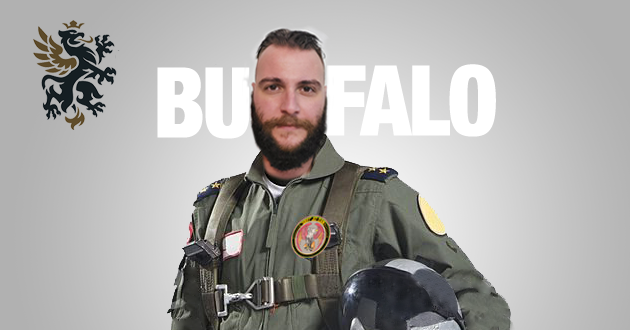 “I grew up, thanks to my father Aeronautical Technician, between airports, air shows and many sector magazines! Those were the years when the very latest G91s flew in the skies and the roaring F104s guaranteed the safety of our skies … the films seen and reviewed until the exhaustion of the poor vhs tapes were the legendary Top Gun, Air America, Bat 21 and the Last Attack … the Myth of the Pilot, of the Top Gun, has indelibly marked my existence which, growing over the years, has led me to always feed it with static modeling, collecting various memorabilia and a lot of research of bibliographic material.

The passion for simulators comes, always with the guidance of my father, with the data Saber Ace, Gunship, Lock On: Modern Air Combat and the whole Flight Simulator series.

Today, thanks also to the VR support, I keep my passion alive in the Grifi Jet Team by flying mainly on the Digital Combat Simulator platform, preferring the study of real techniques and tactics to fully experience the simulation aspect. “